Highlights and other important information for this week are found below.

October is:
Breast Cancer Awareness Month (LRSD will have a team participating in Race for the Cure - a separate message will be sent Monday.) 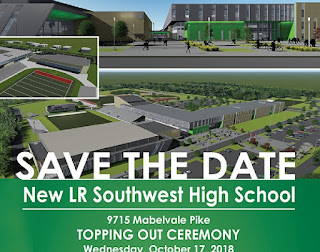 Stacey McAdoo Named Arkansas Teach of the Year for 2019!

LRCH’s Stacey McAdoo named 2019 Arkansas Teacher of the Year in a surprise ceremony Monday. For her honor - in addition to the title, Mrs. McAdoo received $14,000, a huge bouquet of flowers from Supt. Mike Poore, and a beautiful Lagos bracelet from Sissy's Log Cabin. 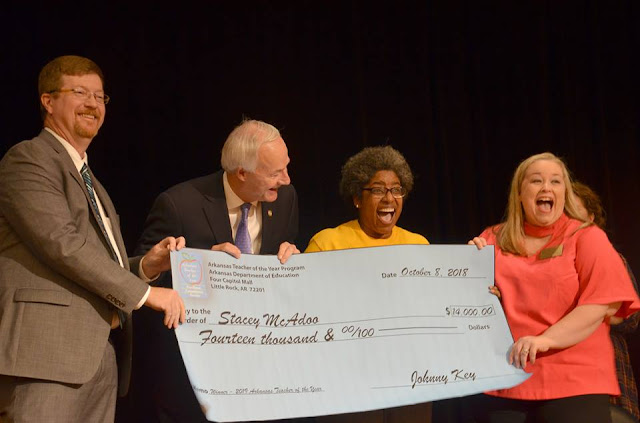 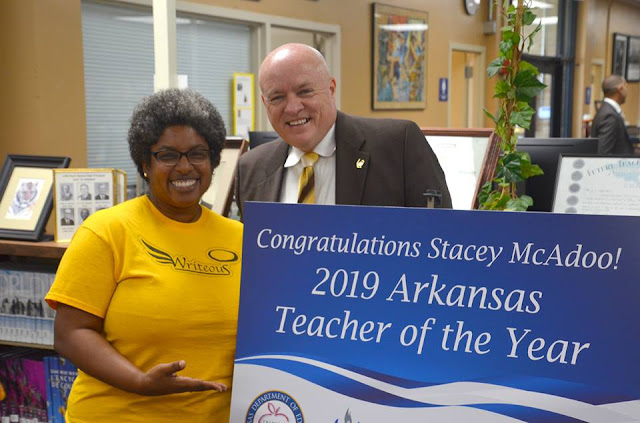 Your LRSD family is proud of you, Mrs.McAdoo! 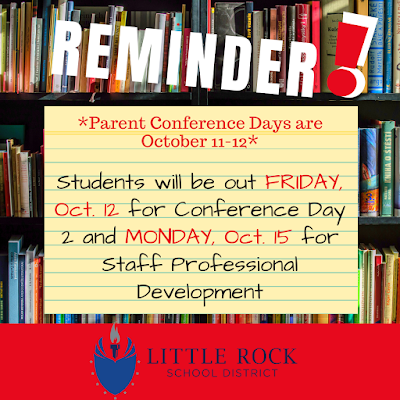 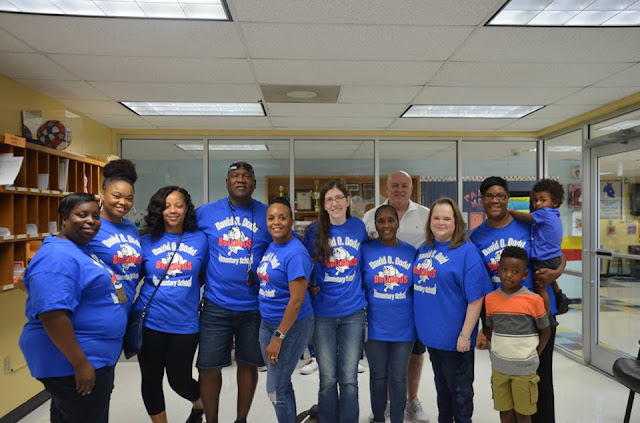 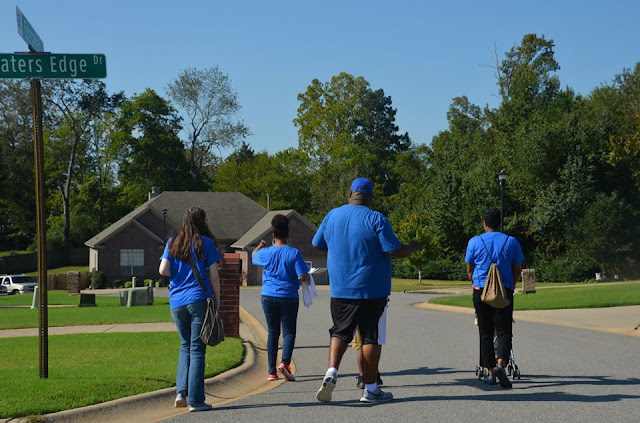 As part of the #FeettotheSeat campaign to tackle chronic absenteeism, 20 LRSD schools conducted a simultaneous community walk to share information about the importance of ensuring students attend school from bell-to-bell, every day. Photos seen here are from Dodd's and Mabelvale Elem's walk. Use #LRSDFeettotheStreet and #FeettotheSeat to see photos from other schools on social media. 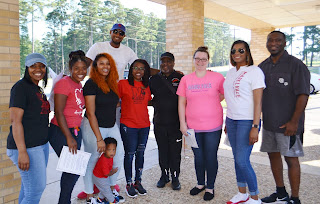 Mabelvale Elementary's route took them to the southwest Little Rock area where they also  distributed fliers and literature. 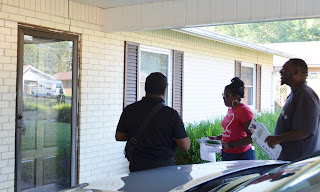 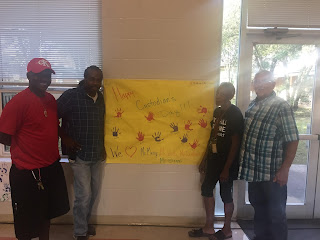 Thanks for all you do to support our students! 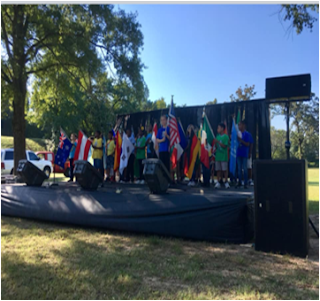 Since the early 1990’s with the very first WorldFest at MetroCentre Mall in downtown Little Rock, Gibbs students have opened the ceremonies with the International Parade of Flags, Pledge of Allegiance, and world language performances.  They did so once again on Friday, October 5, at War Memorial Park for the Little Rock Racial and Cultural Diversity Commission.

Student Eli Odena shared with a staff person that  walking with all the flags flying in the parade represented to him how countries can put aside their differences for peace.  Another student, Annika Deen, shared that participating in the International Parade of Flags made her feel proud to be an American and able to learn about other cultures.  She said that you can never be too young to learn to be a good leader.  All three Gibbs world language groups performed either in song or dance. 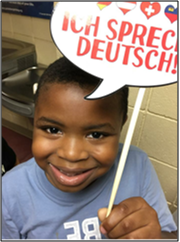 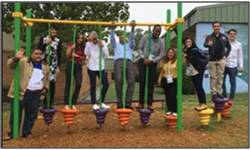 Gibbs recently hosted ten visitors from the Caribbean, Central America, and South America  - representatives of the Young Leaders of the Americas Initiative during their annual Day of the Cultures celebration for Hispanic Heritage Month.  These young entrepreneurs are in Little Rock as guests of the U.S. Department of State and locally sponsored by Global Ties.  They will spend six weeks learning from local businesses that are in their related fields.
Did you know the nation of Antigua and Barbuda has 365 beaches, one for each day of the year?  How awesome a vacation would that be! 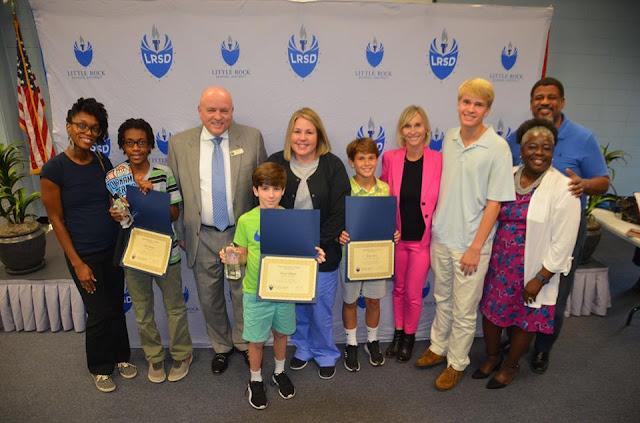 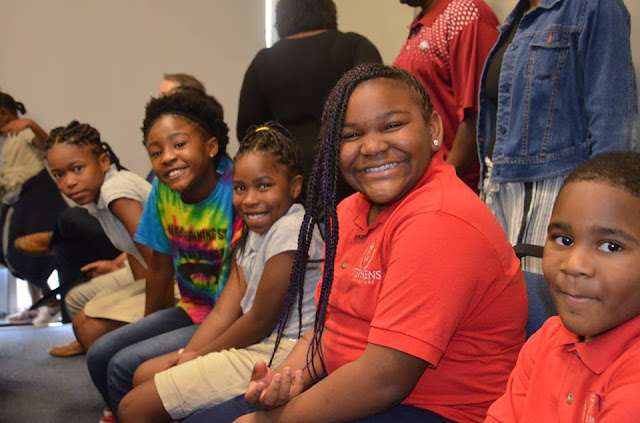 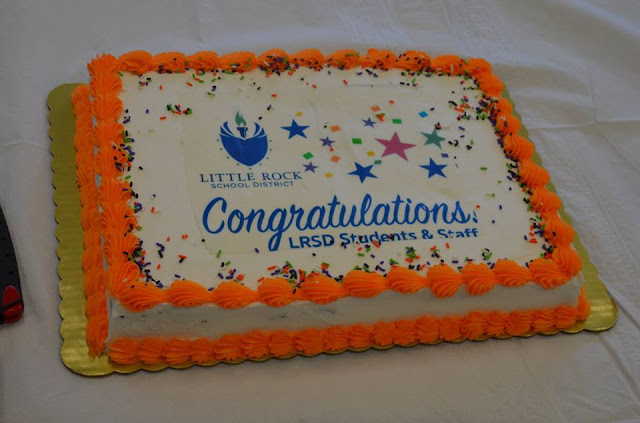 Outstanding LRSD students and staff were recognized with Superintendent's Citations during a monthly ceremony. Among the honorees, McClellan's Derrick Lloyd - LRSD Athlete of the Month; student leaders who helped coordinate their school's involvement in the Victory Walk with KARK-Fox 16; recipients of Economics Arkansas's Bessie B. Moore Award; and the NBA Math Hoops winners. Congratulations to all of the honorees! 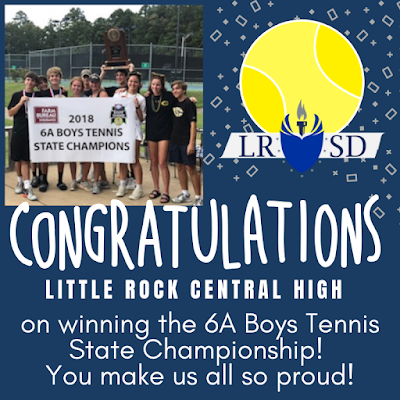 Congrats to our 6A Boys Tennis Champions from Little Rock Central High!


Consuelo Hilliard, Hall High nurse, Stephanie Abrao, school social worker, and Edith Callaway-Frazier, PTA President, are leading the efforts for a health fair at Hall High School.  Students will have access to services ranging from vision/hearing screenings and BMI, to working out and eating properly, and learning to care for a piercing or tattoo. 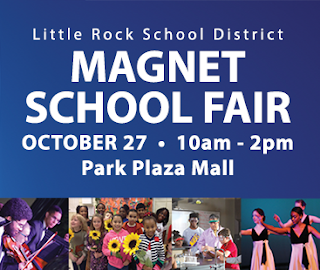 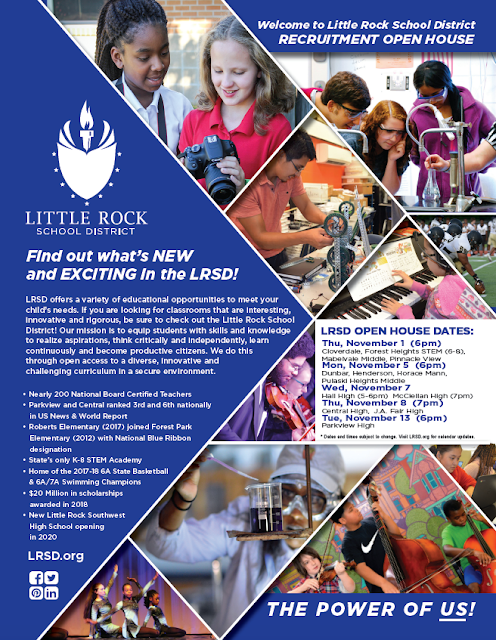 Find out what’s NEW and EXCITING in the LRSD by attending RECRUITMENT OPEN HOUSE events! 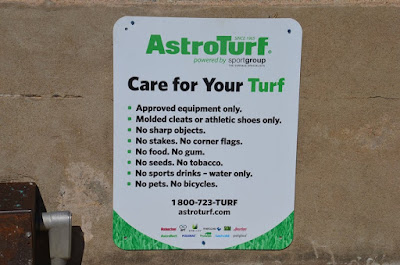 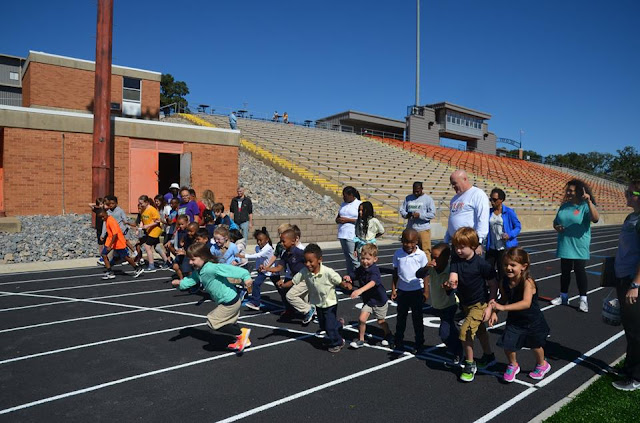 Taking a ceremonial lap around Scott Field, Forest Heights STEM Academy students joined Superintendent Mike Poore and community members for a brisk walk after the track was officially reopened to the public.


The community is asked to help the District maintain the field by observing a few turf rules. Signs with those rules are posted around the field. Thank you for your support! 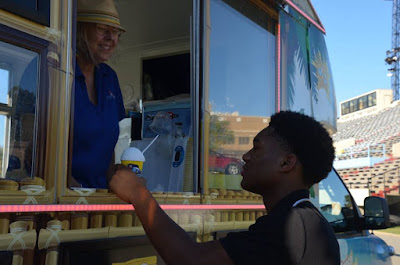 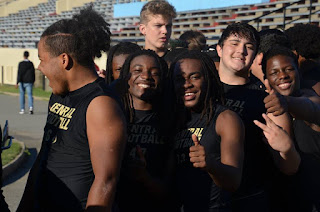 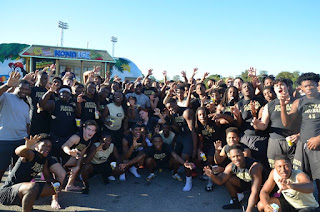 The Tiger football team enjoyed frozen treats from Kona Ice, compliments of KARK/Fox16, after winning a contest for the most student attendees at last month's Victory Walk. Thanks, KARK/Fox 16 and Kona Ice, for recognizing our students with this timely and refreshing treat! #LRSDVOV 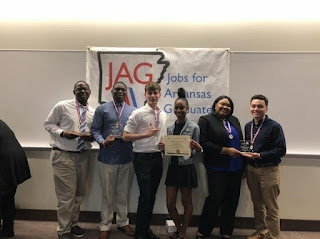 Parkview senior JAG students demonstrated outstanding career readiness skills at the JAG State Leadership Competition at UALR, October 3, 2018.  Riyah Harris placed third in Employability Skills; Tristen Grogan placed second in Math Skills; and Kameryn Baker, Aumri Duncan, and Jose Santos placed first in Project Based Learning by presenting their “Students Against Violence Campaign.” Jaylen Lampkin was selected to sing the national anthem at a general session.  All of these students will travel to Washington, DC in November to represent Arkansas at the JAG National Student Leadership Conference. The students will visit the White House and tour historical monuments.  Way to go students! LRSD is gearing up for another GREAT season of NBA Math Hoops for LRSD 3rd-8th grade students beginning Saturday, October 13, 2018, 10:00 a.m. – Noon, 3001 S Pulaski Street (30th & Dr. M.L. King Drive).  You are invited to pre-register, PLUS, invite other parents to pre-register!  Childcare and refreshments are provided.   In addition to the monthly NBA apparel and door prizes from Learn Fresh Education Company, a lucky family with perfect attendance will be entered into the drawing for a new HP laptop, compliments of Comcast Internet Essentials!  There’s MORE!  A student and parent with perfect attendance may enter into the competition for a chance to win an all-expense paid trip to the National NBA Math Hoops Championship Tournament in Philadelphia, PA, June 2019. 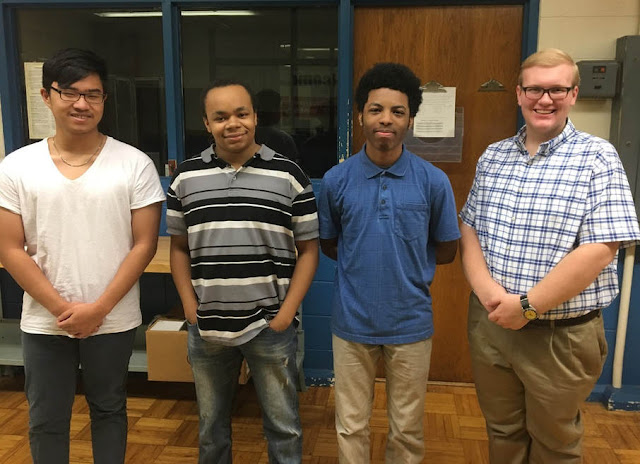 Little Rock School District Athletic Foundation will host the First Annual ONE ROCK LEGENDS HALL OF FAME luncheon event at 11:30 AM, December 5, 2018, at the Little Rock Embassy Suites. The Inaugural Class of 2018 Honorees include:

Houston Dale Nutt Jr., a graduate of Little Rock Central High School, is a former player and head football coach at several universities including the University of Arkansas Razorbacks and the Ole Miss Rebels. Today, Nutt works for CBS Sports as a college football analyst.

Sidney A. Moncrief, a graduate of Little Rock Hall High, is a retired professional NBA player. As an NCAA college basketball player, Moncrief played for the University of Arkansas Razorbacks and was drafted 5th overall basketball player after completing his collegiate career. As a professional player, Moncrief played ten seasons with the Milwaukee Bucks and became a five-time NBA All-Star.

DeeDee Brown-Campbell, a graduate of the Little Rock Hall and the University of Arkansas Fayetteville and is a two-time All-American in the heptathlon as a member of Arkansas’ championship track & field team. During her competition days, Brown was one of just a select few to ever earn more than 5,700 points in the heptathlon. She won two Southeastern Conference Championships and still holds five school records in the pentathlon and heptathlon competitions.

Charles Ripley, Basketball Coach of Little Rock Parkview High School lead the team to become a regional and national powerhouse in the late 1980’s to the mid-1990’s. Today he is head basketball coach and athletic director at Arkansas Baptist College. Coach Ripley is the father to thousands of student-athletes.

Oliver Elders, Basketball Coach of Little Rock’s Horace Mann and Hall High Schools, retired as the winningest active coach in the state with 656 victories and being inducted into the National High School Hall of Fame.

Wilson Matthews (posthumously), Football Coach of Little Rock Central High School became a legend in Arkansas after winning ten state championships and producing a 33-win streak in eleven years while leading the Central Tigers. He later became an assistant to Frank Broyles at the University of Arkansas. The Broyles Award Trophy depicts Matthews standing next to Broyles.

"It is long overdue that we honor those of the LRSD deserving to be recognized for their athletic achievements and accomplishments," Dr. Fitz Hill said who leads the efforts of the LRSD Foundation. “Our student-athletes need to know of those that came before them and left a path to follow and model. LRSD has a proud athletic tradition that we will continue to recognize for years to come as a way to improve our financial support to the athletic departments and while also developing the grassroots talent in middle school.

Tickets and sponsorships for the event are available by calling 501-951-1606 or by contacting fitz.hill@lrsd.org.

The Little Rock School District Athletic Foundation was created in 2017 to support strategic initiatives of the LRSD for the purposes of engaging and attracting students through extracurricular activities to ultimately compete through interscholastic competition. Students engaged in activities outside the classroom often have better rates of attendance, retention, and academic achievement.
In the Community...
The Clinton School of Public Service wants to share the following opportunity with you.  Click on the link below for details.

Time for the Arkansas State Fair - click on the link below for the schedule and admission info. 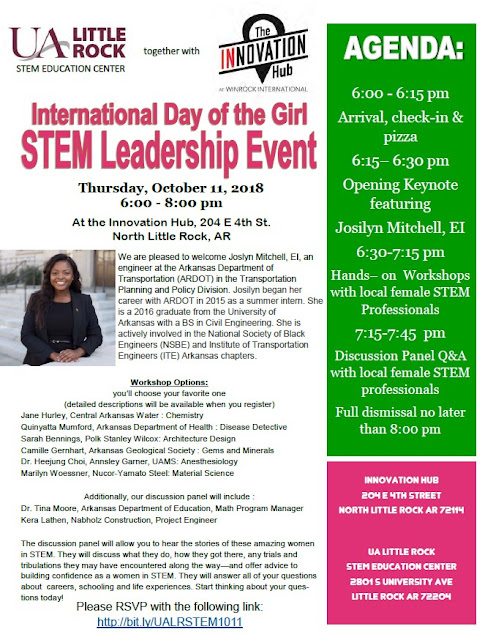 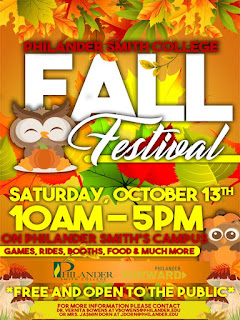 Looking for something? Search here! 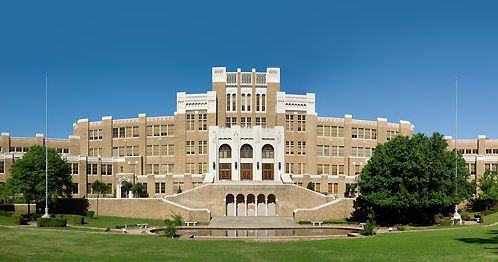